Custom ATSC 3.0 / NextGen TV Solutions from CDS
The Comark Digital Services (CDS) group has been established within Hitachi-Comark to assist customers with the complex navigation of equipment selection, integration services, and field deployments of ATSC 3.0 / NextGen TV solutions.  From software-based encoding solutions through full ATSC 3.0 signal processing and finally test and monitoring, CDS can custom tailor the end-to-end equipment solution necessary to get your station on the air and producing new digital revenues.  We have partnered with key technology vendors in the market to offer a wide depth of options for every broadcaster’s needs.  Contact CDS for more information or a full solution quote at sales@comarktv.com.

Encoding Solutions
CDS powered by TITAN Live is a high VQ, software-based encoding and multiplexing solution for ATSC 1.0 and ATSC 3.0 requirements. Right out of the box, TITAN Live supports multiple outputs including MPEG2, H.264, HLS, and HEVC from a single encoder, it is ATSC 3.0 ready.  It also supports a variety of resolutions (SD through Ultra HD) and can be used to supply content to OTA broadcast, CDN/OTT, and dedicated cable MSO/DTH feeds.  TITAN Live can be run on any host including Linux, Virtual Machine (VM), or cloud-based deployment. For additional info: see DTV Encoding Solutions.

Since CDS powered by TITAN Live is a converged-based solution, migration from ATSC 1.0 to ATSC 3.0 is simple. ATSC 3.0 requires a ROUTE/MMTP server and scheduler/broadcast gateway in the equipment workflow to process and format the services into ALP(s) and PLP(s). Comark has partnered with several vendors for these technologies to form an end-to-end ATSC 3.0 platform.

DTV Power Amplifier De-rating with ATSC 3.0
In addition to the IP networked capabilities that ATSC 3.0 will bring to the broadcast industry, impacts to your DTV transmitter plant need to be considered. The table to the right provides a quick overview of the estimated RF output power difference when converting a DTV transmitter from ATSC 1.0 (8VSB) to ATSC 3.0 (OFDM). Why do amplifiers need to be de-rated? The answer lies in the fact that VSB and OFDM have different peak-to-average power ratios. And since DTV output power is always measured in average watts, the amplifier’s peak power capability limits the average. So when converting a DTV transmitter from 8VSB (6dB peak-to-average) to ODFM (8 to 10dB peak to average), the peak power must be taken into account.

RF Plant Considerations with ATSC 3.0
Beyond the DTV transmitter that you operate (or plan to replace) other factors should be considered when migrating to ATSC 3.0. These factors are primarily geared towards the transmission line, antenna, and tower structure. However, it could also impact filters and combiners. To take full advantage of ATSC 3.0, DTV stations should consider transmit antennas that use either Circular Polarization (50% H-Pol with 50% V-Pol) or Elliptical Polarization (70% H-Pol with 30% V-Pol or something similar). Adding a vertical component to your transmit antenna has proven to aid mobile services and deep indoor signal penetration. Remember that ERP is based only on the H-Pol power, therefore a higher power transmitter may be required (2x in the case of Circular Pol) should you decide to add a vertical component for ATSC 3.0.

Most important with ATSC 3.0 is the power handling capability of the mask filter ®, transmission line ®, and transmit antenna. Remember that ATSC 3.0 will have peak power levels 10dB (x10) above the average power of the transmitter output. ATSC 3.0 will also have a wider bandwidth than ATSC 1.0 using 97% of the allocated spectrum compared to 90% for ATSC 1.0. A standard bandpass filter that is tuned for the correct channel should be capable of either format. However, an ATSC 1.0 sharp tuned filter or channel combiner may have problems with ATSC 3.0. And while reviewing the power handling of the hardware that runs up and is mounted on the top of the tower; remember that the tower should be reviewed for wind loading and compliance with the most recent issues of EIA/TIA engineering standards.

Single Frequency Network with ATSC 3.0
ATSC 3.0 supports both high power – high tower deployments as well as Single Frequency Network (SFN) deployments. We begin by asking the simple question, “What is an SFN?” A Single Frequency Network (SFN) is made up of two or more transmitters simultaneously broadcasting the same time-synchronized signal over the same frequency to achieve greater signal coverage and reception. “Why would a Broadcaster want to implement an SFN system?” SFN’s allow broadcasters to more completely “blanket” RF coverage to their target market. Adding second, third, and fourth transmitters in SFN mode in conjunction with a main transmitter can significantly increase signal reception in targeted areas. Consider SFN design parameters including “sparse” SFN transmitter placement and their associated antenna patterns.

Time vs. Layer Division Multiplexing
ATSC 3.0 can be setup to deliver data in either Time Division Multiplexing (TDM) or Layer Division Multiplexing (LDM). The broadcast gateway in conjunction with the exciter is configured for either TDM or LDM at the launch of the ATSC 3.0 service. An ATSC 3.0 system that uses TDM concatenates, in time, multiple PLP’s within a subframe by using non-dispersed PLP’s. An ATSC 3.0 system that uses LDM multiplexes multiple RF signals that are layered on top of one another. A 2 layer LDM system has Core layer (more robust ModCod) and an Enhanced layer (less robust ModCod). The Enhanced layer is “injected” between -3 and -10dB relative to the Core layer. For additional info on the tradeoffs of LDM, see the Solution Datasheet. 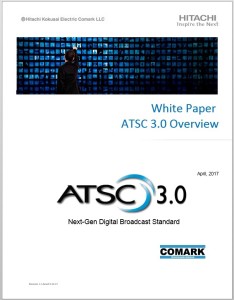 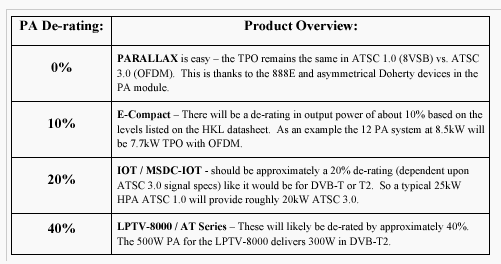 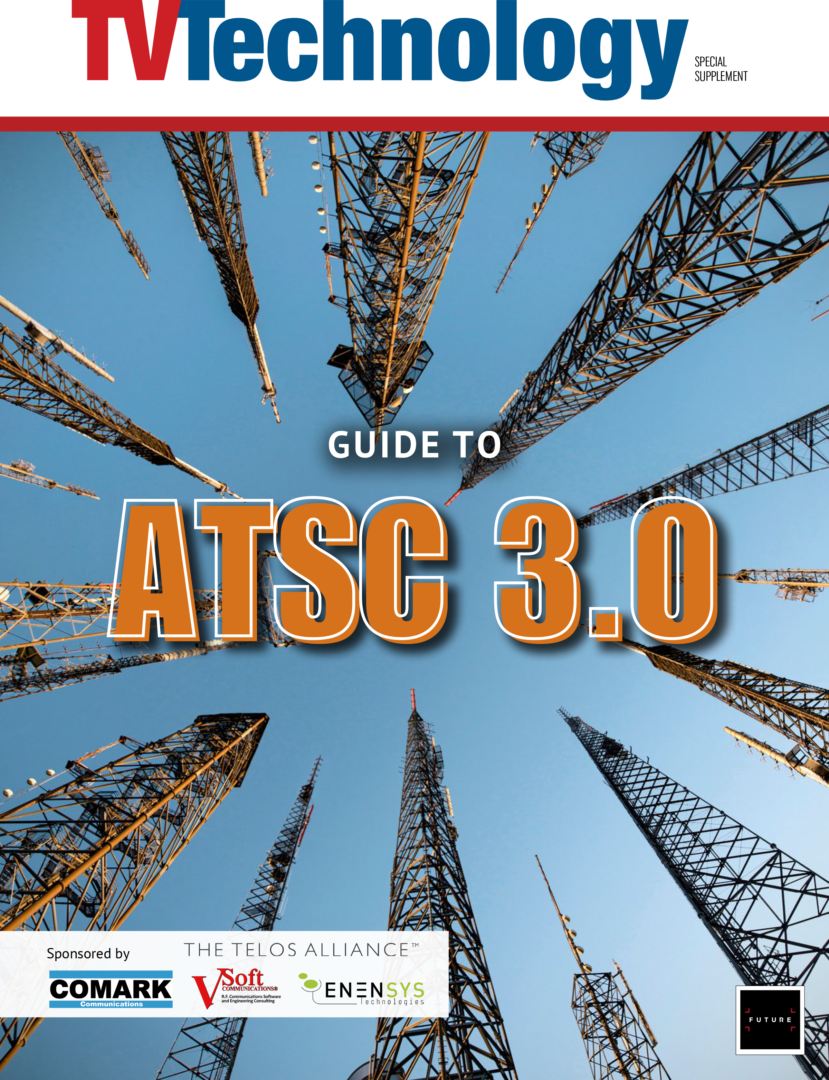